If we are slaves to thought, can we think our way to freedom?

Taking my own medicine, I was on a Step Six date with myself. A Step Six proscription is enhance your intellect, enrich your spirit, and love yourself by gathering information, finding inspiration, and supporting your health respectively. I combined all three by taking a walk, while communing with nature and immersing myself in art.The scene for the Step Six date was Philadelphia’s Kelly Drive and my destination was Fountain Green Drive to visit the sculpture of Ulysses S. Grant, the Playing Angels, and the Sleeping Woman mural. I was enjoying the trees and the curves in Kelly Drive when I reached the plaques that described all three works of art. I faced the Grant sculpture and admired the artist’s work, but to look at the sculpture I had to face Fountain Green drive and in seeing it, all I could think of was a recent news report about a woman who had driven her car down that road, crossed Kelly drive, sped over the grassy park of cherry trees and the Playing Angels sculpture, to dive into the Schuylkill river in a suicide attempt. She was rescued. 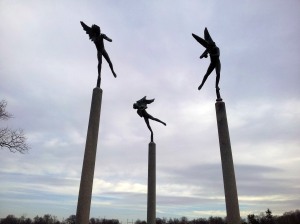 A harsh wind was blowing. Winter was reluctant to leave and with my mind on that desperate woman, I felt a sense of doom. I walked along the route her car took as I turned away from Fountain Green and headed toward the Playing Angels and the Sleeping Woman by the river’s edge. The wind made my steps feel unsteady. Far from their Stockholm roots, held up on 20-foot high pedestals, the Playing Angels towered above me. I had to lean back to see all three of them with their musical instruments. I felt completely alone. After studying each of them in this way I turned to face the river and approached the edge in search of the Sleeping Woman, but with every step I grew more anxious.

The memory of a nightmare came back to me like a warning. In the dream, I followed other women in an absent-minded march to the edge of a cliff. The women in front of me slipped off the edge. When it was my turn, I too easily and without as much as a whimper slipped off and plunged down to the bottom. When I awoke from the dream, I began a day under thick, unshakable glimpses of nightmare memory. My haunted malaise was replaced by the news of Michael Jackson’s death. He too had slipped off life’s edge and plunged to the bottom.

With my mind in such a place and the light slipping into darkness, the wind off the river felt ominous. I dared not get close enough to the edge to see the mural. Thoughts of a river-plunging suicide attempt, a slip-off-the-cliff nightmare, and the death of Michael Jackson brought fear and sadness where adventure and joy had been. I cut my step-six date short. Later I read that most of the Sleeping Woman mural with its “Deaths Tremendous Nearness”, “Like Wind Rushing Down”, and “The Dying Soul” phrases, slipped in to the water and disappeared from view a few months after it was created. Slip. Plunge. Under. Forever.
On a lighter note and a subsequent, less windy, and brighter day, I visited the Grant and Playing Angels sculptures with the mission to discover what remained of the Sleeping Woman mural. Success, but no less disturbing, I found portions of the prose poem faded and disjointed, cryptic and ethereal. Playing Angels above, a Sleeping Woman below, and Ulysses S. Grant with his horse standing before the battlefield of my mind, watching all.

At the time of this blog post, the Playing Angels have been removes from their pedestals. I can’t find information on why they were removed.
Check out Museum Without Walls by phone 215-399-9000 or online http://museumwithoutwallsaudio.org/Text from the Museum Without Walls plaque:
Ulysses S. Grant plaque #35
The bronze monument depicts Ulysses S. Grant, the Civil War General and 18th president of the United States, surveying a battlefield, four days following Grants death the Fairmount Park Association formed a committee to Commission the memorial. Seven artists were invited to submit sketch models. Accomplished sculptor Daniel Chester French was selected and requested that former student and horse modeller Edward C. french collaborate with him. Potter is responsible for the horse and French the rider. French, best known for his sculpture Abraham Lincoln for the Lincoln Memorial n Washington D.C. Also created Law, Prosperity and Power in West Fairmount Park.Sleeping Woman plaque #34
Painted atop a stone retaining wall at river’s edge is Sleeping Woman a collaboration by poet Stephen Berg and artist Thomas Chimes commissioned by the Fairmount Park Art Association. This 1,000′ long prose poem written specifically for this site, reflects themes of grief, nature, and the transformation of life. 1991Playing Angels plaque #33
This trio of playful bronze angels is the work of Swedish artist Carl Milles, who early in his career served as assistant to sculptor Auguste Rodin. Cast from original sculptures in the Milles garden overlooking the harbor of the artist’s hometown of Stockholm, these were purchased by the Fairmount Park Art Association in 1972.Step Six is Nourish Your Mind Body, and Soul Goodness. Suggestions on how to do this are in my Step Six Guide available from my website as a fee gift here. http://www.justgetitdonenow.com/free-gift.htmlThe suggestions are grouped into three categories
Information –Enrich Your Intellect
Inspiration – Enhance Your Spirit
Self Love –Support Your Health
learn more www.justgetitdoennow.com

Be a Leader in Your Own Life

4 out of 5 dentists recommend this WordPress.com site